Hot Springs Village parishioner commemorates her mother's life by preserving diocesan newspaper issues from her birth year, 1921, and the year she married, 1945 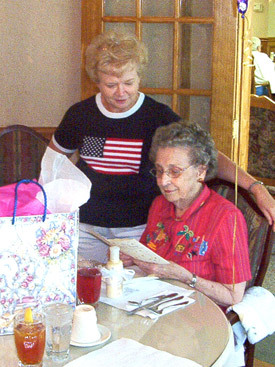 Sheila Harrison watches her mother, Lil Buford, on Buford's 83rd birthday in 2004. A gift from a fund she left after her death paid to digitize archives for the years she was born and married.

Sheila Harrison watches her mother, Lil Buford, on Buford's 83rd birthday in 2004. A gift from a fund she left after her death paid to digitize archives for the years she was born and married.

Arkansas Catholic and The Guardian were long a part of Lil Buford's life. Now Buford's legacy will help give new digital life to brittle and yellowing pages of the newspaper that has kept Arkansas' faithful connected for a century.

Sheila Harrison of Hot Springs Village, who served as a correspondent for Arkansas Catholic for six years, donated $5,000 of a fund left by her mother to be used for Catholic ventures in Arkansas. The venture she selected was the Guardian Angels campaign, a program that seeks to preserve the legacy of the diocesan newspaper by digitizing its first 90 years. The newspaper has been created digitally during the last decade.

Digitization will allow users to search for stories more easily and make the history of the Little Rock diocese even more accessible.

"I did it in memory of my mother," Harrison said. "My mother always read the Arkansas Catholic and The Guardian before that. I just knew that was a part of her life."

Harrison said she and her mother often talked about the articles in the weekly diocesan newspaper.

"She didn't always agree with the articles, but she enjoyed knowing what was going on in other Catholic parishes in the state and such things as Cursillo and Scripture study," Harrison said.

With the gift, Harrison requested that the 1921 volumes of the newspaper be archived in honor of the year her mother was born. She also asked that 1945 be saved to commemorate the year her parents were married.

Her request for 1921 had an unexpected benefit.

"Part of 1920 and 1922 were also archived because the volumes were not done exactly on a calendar year," said Malea Hargett, editor of Arkansas Catholic.

Buford attended St. Mary Church in Paragould where "the church and the school there were very important to her."

Harrison said the history laid out on the pages of The Southern Guardian, The Guardian and Arkansas Catholic is valuable.

"I just know how important it is to be able to archive and know what you've got," she said.

Harrison recalled writing a news story about the opening of a time capsule when St. John the Baptist Parish in Hot Springs marked its centennial in 2008.

"So much of their things were deteriorated and gone," she said. "They had lost those parts of their history.

"I think it's important that we know where we came from, especially in Arkansas where there are so few Catholics in the state," Harrison said.

With the Guardian Angels campaign, "I hope you'll be able to get this in a searchable format so that people doing research will be able to use it."

Those digitized volumes of The Guardian, as well as volumes of The Southern Guardian for 1911-1914, are now searchable online. To browse or search those issues, click the "Archive" link on the front page of the Arkansas Catholic website.

Diocese will look at marginalized groups during synod

Bishop Taylor: Synod a chance to ‘listen with an open heart’

#13: 10 years after the murder of Patty Guardado

Young students have 'guardian angels' to watch over them

Scripture author grateful for time to write in retirement

News & Views From You

Knights should be Rosary Ambassadors

Knights of Columbus to host 9-11 service

God wants marriage as covenant, not a contract

Live right, do what you can to stay out of hell, purgatory

To serve God, open your eyes, ears, hearts to people